One of my favorite memories is going to the wizarding world of Harry Potter with my wife and kids and just soaking it all up. It was at the tail end of a long trip, it was hot and it makes me smile every single time I think of it.  When we found that our local symphony was performing the music to Harry Potter and the Sorcerer’s stone a few weeks after we returned, we decided that we had to go and that we had to go in costume. My wife went as Bellatrix, my kids went as students from Ravenclaw and Slytherin and I went as Mad Eye Moody.  Moody’s costume was a fun one. His most identifiable feature would of course be his magic eye, but secondary is his walking stick which can serve double duty as his wand in a pinch.

First off I needed a stick.  ebay provided a nice curly one that was tall enough and only cost me $20.  Moody’s staff is fairly straight, but I liked the way that this one looked and I never build anything as a direct replica.  With the stick secured, I now needed a goats skull to put on it.   My google-fu failed me completely on this one, so I started looking for skulls that looked goat like and that I could perhaps modify.

Thingiverse produced a keychain sized model of a Star Wars TaunTaun skull that looked vaguely goat like, so I downloaded that, blew it up to 400% it’s size and went to town with meshmixer editing the STL file.  After cutting off the horns, flattening out the bumps and removing the jaw, I went on a hole filling spree and then cut out a giant sphere inside the skull to fit the top part of the staff.  A quick word on mesh mixer, it’s clunky, the documentation is practically non existent, but it is the best free tool for editing mesh files I have come across. Take a few days and learn the basics, you won’t be upset that you did.

I printed the skull in PETG because I needed it to be tough and something I could thermoform onto the staff.  The idea is that I need the skull to merge into the shape of the staff. I’ll do a lot of that with filler and putty, but I’d like to do as much as I can with the actual pieces to save labor later. So once the skull has been printed out, I took my heat gun and used it to spot heat sections of the skull to the point of being soft. I would then shape those parts by hand onto the top of the staff.  This was really anxious work because if I went too far, the part would be ruined and I’d have to start it all over. 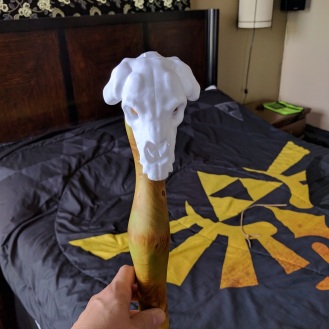 No I did not use my heat gun on my bed. It’s just where I had the best light for taking pictures. Attaching the skull to the staff ended up being super easy mode.  Hot glue happens to hold really well to the wood and to the plastic, so I spent some time making sure I had really good coverage inside of the skull. It’s strong enough now that I think the skull will break before it detaches.

The staff doesn’t exactly  have bark on it, but it does have a bit of texture. So the next step was to blend in the 3d printed skull into the staff with bondo and then smear bondo around the staff itself to give it a bark like texture.   I used a fairly excessive amount of hardener to make the bondo set up very quickly since I knew I was going to be laying it on thick. I had about 3 minutes total of working time.  After drying I sanded down the edges to make it blend more evenly and then started in with the filling primer. 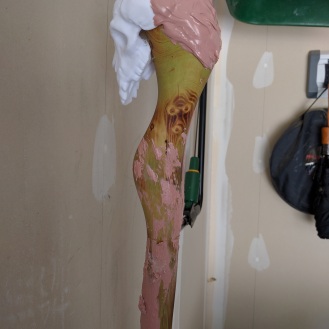 With the base staff done, now it’s time to add the vines.  I tried a few things here;  rope, twine, combinations of tubing and ended up using something that I have a ton of here at the house.  Cat 5e.   The idea is to take a few strands of ethernet cable, twist them and bend them around the staff the way I want and then use lots of hot glue to bind the cables.  Once the cables had been attached, I went over them again letting hot glue run all over the place trying to simulate the texture of a vine.  I also smeared bondo on top of the hot glue and cables to help fill in voids and provide more texture.  The overall effect worked out really well and, after a few coats of filling primer, left me with stable and good looking vines.  I sanded down the high spots, blended in the blobs and got ready to paint

I’m not very good at documenting the painting process. I usually have both hands covered in paint and grabbing my phone isn’t really an option, so here is a description of what  happened between the previous step and this final one.  I start off with a base coat of filling primer and then moved to a hammer texture coat of brown.  I let that dry overnight. The next evening I spent about an hour basically just putting paint on rags and rubbing it up and down the staff. This leaves the paint streaked in a similar way to how color shows up in wood  and is super easy to do.  Once the base colors had all been rubbed on I grabbed a small paint brush and some black, brown and red paint and started dabbing it into all of the voids and creases to bring out the texture and make everything look very worn. A few coats of spray poly sealed everything up and then I used some 000 steel wool to knock down the shine.   The final step was to wrap the staff grip in leather and then rub some black paint into the leather to age it.

A WHOLE lot of firsts with this project.  I’d never edited a 3d mesh before, I’ve never used leather on anything, the wood texture is a new one for me and I’ve never made something that is designed to be used out in the real world instead of hanging on a wall. Overall I’m very happy with this piece and look forward to using it in costume!