During the Rapture Civil War, adam abuse was rampant and it’s effects led to the downfall of the human population of Rapture.  Continued use of adam deformed and the mind and body of the people of rapture, turning them into monsters willing to kill each other in the hopes of find the tiniest remnant of adam inside of their victim

I thought this one would be a fun one to do in glow in the dark.  This build starts off the same as the other mask, but this time I used a model remix from sraf. CA glue to hold the pieces together and then the usual bondo, sand, prime, sand, prime routine 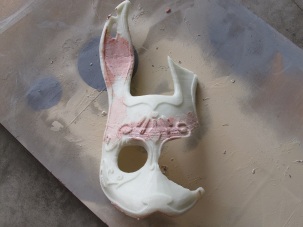 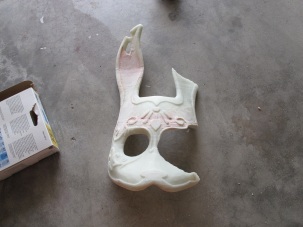 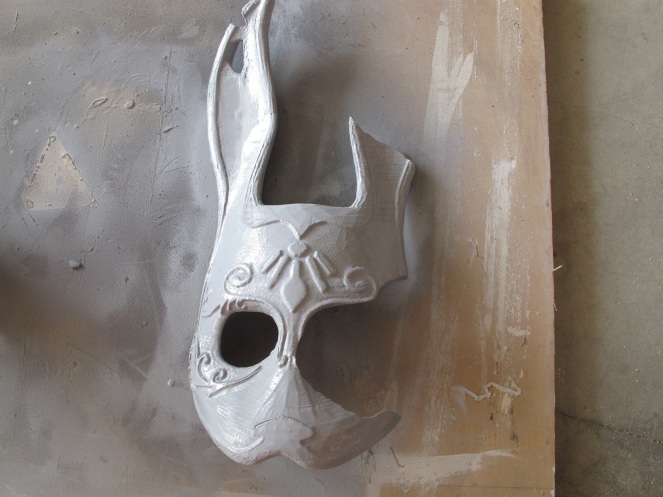 This one needs to look pretty rough, so I wanted the paint to be very cracked and scratched up. I decided to try something new and laid down a coat of black gloss, then while that paint was still wet I laid down a coat of my top color (ivory) and immediately put the mask in front of a big fan. This made the paints dry at an uneven rate and caused the top coat to crack and let the bottom black bleed through. The black ended up being a bit too intense so I hit it with a light coat of ivory later on, but I liked the effect overall. while I was waiting for it to dry I found the elmers glue method, which would have been a whole lot easier, but now I know for next time. 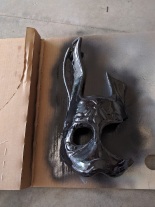 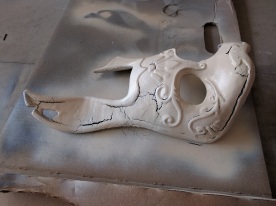 While the paint was pretty beat up, I got it in my head that this splicer has probably been through a lot and has been hit with incinerate! at least once, so I decided to boil some of the paint.  Not much to this, you take a heat gun, get it hot and aim it at paint until it bubbles. 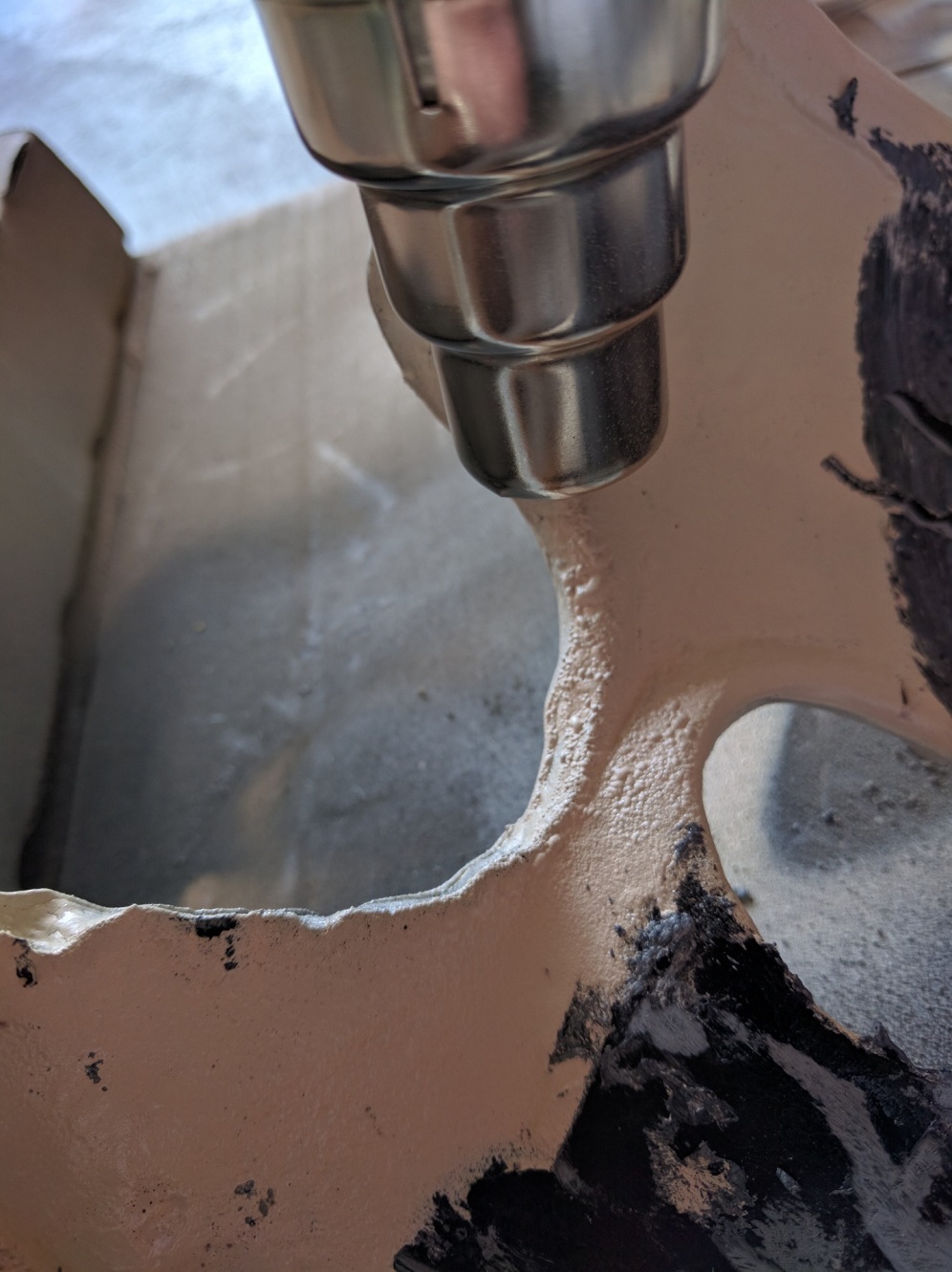 Next up was scraping away all the paint and filler I just applied to get to the glow in the dark PLA base. I didn’t want this part to go heavy, I really just wanted a thin outline of the mask, helping to make out the shape, but I did want a lot of glow around the  eyes to reflect off the face of the person wearing it.  I just used a razor to scrape away the finish and checked my work in a dark closet as I went along.

Next up is gilding. This was actually very fun and not nearly as much work as the last mask because the idea is to make it rough.   I used the same technique as before, but only applied the glue in specific spots and then immediately tried to brush the gold sheet off.  After that I painted the brown outlines, allowed those to dry and then sanded them gently.  I also hit the piece with a little bit of transparent brown in my airbrush to dirty things up a bit. 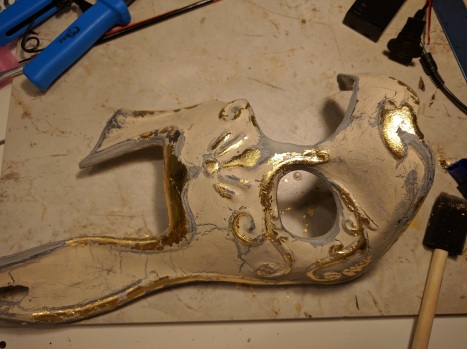 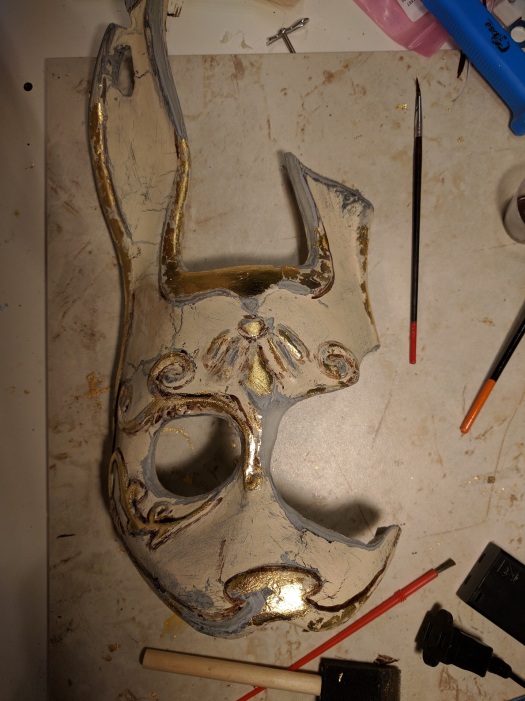 This last bit is to give the mask a bit of battle damage with some blood splatters. A mix of red, brown and black paint got me to a color that I liked and then I just loaded up a foam brush and splashed it across the mask.  I tried to make it consistent with the damage and like how it turned out overall. 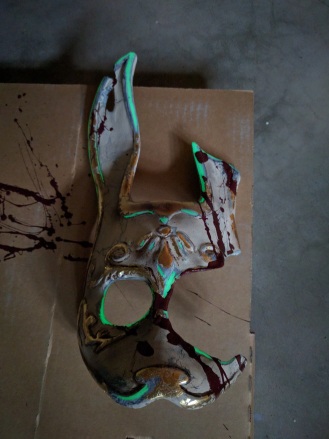 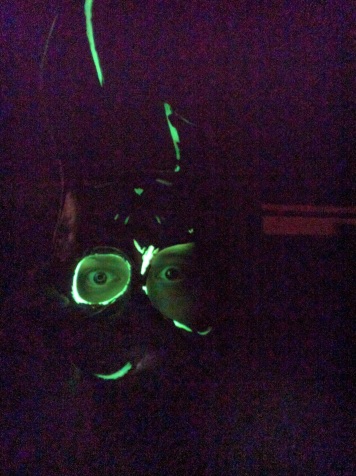 And now my set is complete 🙂